Recorded by Rolf Munkes at his Empire Studios in Germany and mastered by music legend and award winner for Adele’s ‘21’ Tom Coyne at Sterling Sound in New York; ‘Risen’ follows the bands revered 2012 ‘Rising’ EP and will be released on 20th October via Plastichead Distribution/MRR Records.

Guitarist Mark Rossi comments: “The subject matter transcends individual boundaries, hearkening to darker scenarios yet striving for resolution. The lyrical approach follows a trend of maintaining hope while facing difficulty and conflict. All the evil of mankind cannot suppress the people if they won’t let it. Aside from the lyrics and tone, the project’s unifying element is one of hard rock expression, which defies definition with every song.”

Frontman Chandler Mogel (also of Outloud & Chrome Public) adds: “Musically and lyrically ‘Risen’ is a continuation from ‘Rising’, which was just a taste but began to touch on some of the deeper subject matter that I wanted to develop further into my writing; I had also been writing some Outloud songs with deeper meanings but for me it wasn’t really working in that setting. I knew I needed a different approach musically for it, and Khaøs seemed like the right fit so I channeled this focus there. I wanted an outlet to really convey problems with society, personal struggles, mental mechanisms, and the reasons for all of this. As always I leave the lyrics open to interpretation from the listener as each person will take something different from them, but these are general themes that are prevalent here.”

Mark who designed the artwork himself discusses the cover art: “As a first full-length album, ‘Risen’ is a sort of baptism of fire for this band. The visual concept of the artwork tries to accentuate this primordial aspect, in a manner of speaking the birth of Khaøs and its origin. We used symbols like a faded version of Leonardo’s Vitruvian Man for the background, a theme I was dealing with before starting this project. This picture reflects somehow many of the topics treated in our songs. It is static in structure but dynamic in its presentation of a moving, living man. A bit like our music”

“I had different ideas for the album cover first. I started with an orb but decided it was maybe too simple and too generic for this type of album. Finally I used that idea for the design of my guitar pic. Then I switched to the griffin theme. Chandler liked my very first sketch and we ended up using that exact picture for the album cover.” 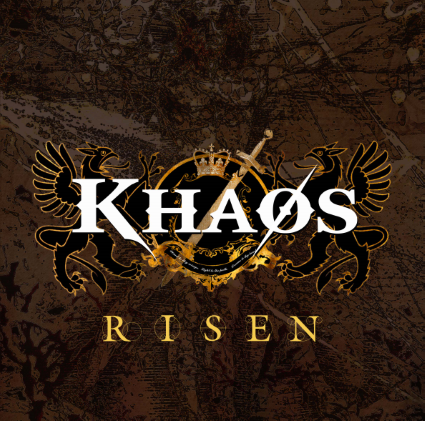