The band formed in early 2011 and each member brings diverse influences to create a compelling mixture of electrifying riffs, thrilling breakdowns and captivating choruses; while striving to write unique hard rock songs that translate well onstage. 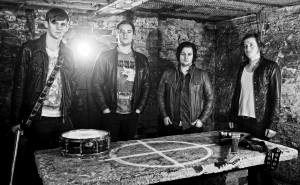 “Perfect Crimes have every drop of potential needed to make it in such a tricky industry. This is unsigned music done right.”
Phoenix Music Online

You can stream the track ‘Black Cloud’ HERE

The band recorded their debut EP, Skeleton Key, at Steel City Studio in September 2013, before embarking on a short UK tour that took them to Leicester, Chesterfield, London and Northampton.

2014 – PC were featured as ‘local heroes’ in Kerrang! magazine, and had their song Scapegoat broadcasted on BBC Radio Sheffield. The band also completed a second UK tour that saw them play in London, Doncaster, Edinburgh, Nottingham, Leeds and Manchester. The Skeleton Key cycle ended with memorable appearances at both the Tramlines and Doncaster Live festivals. After returning to Steel City Studio to record a new single, Black Cloud was released in November.